These days, we’re less reliant on the big bad microphone with all the fancy recording capabilities and that clear sound only studios can capture. Nowadays, there are Chinese companies that are making microphones similar to the big brand names that sound and work just as well at half the price.

There are many different kinds of microphones. The condenser microphone is the most versatile. It’s very directional, so it records what’s directly in front of it and off to the sides, while rejecting sounds coming from behind it. Choosing the best microphone depends on what type of instrument that you’re recording, but condensers are typically the most versatile microphone in a cardioid pattern. A decent common condenser microphone is the Shure SM57, which can be found on the internet for $75- $100. It’s a real workhorse that can be used for tons of different applications.

If you’re doing audio and video, something like the Rode VideoMicro works quite well. It has a 1/8th inch microphone plug, so it’ll plug in to most phones, though you’ll need a dongle with the newer iPhones. The microphone comes with a shock mount and a windshield, which both help reduce background and environmental noise. It’s a great option for people that are doing a lot of vlogging on their iPhones, or even on a camera. If you have a DSLR camera that records video, it will plug into there as well. But again, the trick is that you’re recording directionally, unlike the omnidirectional pattern microphones built-in to smartphones and laptops. Have a clear idea of what the microphone will be used for and the sound you want. That will help you pick something to meet your needs.

Many musicians have some model of the Zoom portable recorders. The Zoom recorders have settings to adjust the way that that microphone captures sound, though the capabilities vary by model type. So you can adjust the settings to make the microphone more directional, or even record in stereo. Increased settings, however, leave more opportunities for user error. Although the Zoom mic does a pretty good job, an external microphone that’s specific to your needs can work more effectively than relying on the internal mics.

The Zooms have a lot of great features, such as line-in interfacing, and the ability to connect to all kinds of different microphones. They are portable and can be used in the field for extended periods of time. But for a student musician just looking to try to record samples for submission or for their teacher, using an iPhone with a cheaper microphone will probably be the more efficient approach, mostly because it’ll be easier to use. However, if you are interested in exploring the extra features of Zooms, such as the ability to record multiple files and access them quickly, plug headphones into it, a stereo microphone, and a large capacity and long battery life, they are definitely worth it. If you are going to perform somewhere, and want to stick a recorder in the back of the room, the Zoom is much better than a smartphone, because it’s designed more for that application. With a phone, you might get a call, or need it for some other reason. 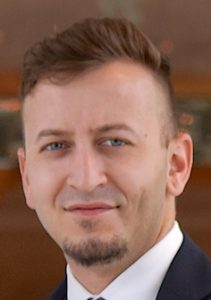 Michael Primeau obtained his Bachelor of Science in Audio Engineering Technology from Lawrence Technological University in Southfield, MI. He began his career as a forensic expert at Primeau Forensics, LTD. in 2009. While Michael has actively worked in the audio and video forensic industry for 8 years, he grew up around it through his father, Edward Primeau. Edward Primeau founded what is now known as Primeau Forensics, LTD. in 1984, 7 years before Michael’s birth. You could almost say that he was born to be a forensic expert.
Michael is currently a member of LEVA (Law Enforcement and Emergency Services Video Association), AES, and IAI. He has completed training through LEVA in Video Forensic Analysis and Photographic Video Comparison. He has also completed training with the University of Colorado Denver Center for Media Forensics in Forensic Audio Authentication and Audio Enhancement and Forensic Image Authentication. He has also certified as a Forensic Video Technician through LEVA. He has worked on investigations ranging from cases in the United States to those in Sweden and Canada. Along with actively working on cases, Michael has consulted with the media on several cases including appearing on The Travel Channel’s popular TV Series Expedition Unknown.
Michael has recorded many classical musicians in Michigan including Sharon Sparrow, Alyssa Primeau, Rudolf Ozolins and many others.