I was around 16 when I decided I wanted to become a professional orchestral musician. I actually never wanted to be a soloist —  I love the social aspect of music-making and didn’t think the lifestyle of a soloist was right for me and my personality. I really loved chamber music, but in terms of making a career, the orchestra is where I wanted to be.

By the time I was a senior in high school I was pretty advanced; I was active in my local youth orchestra, competed in local competitions, and had attended Interlochen Arts Camp for a few summers. There I was inundated with music for eight weeks around other musicians. I felt like I was in my element there, and I realized I wanted to be a musician. It felt right. So in the winter of senior year I auditioned for music schools and played the Dvorak Concerto, the 2nd Bach Cello Suite, as well as some Piatti Caprices and Duport Etudes. My parents were understandably worried about the stability of a career in music, so they also had me apply to regular universities. We clashed a little, but I won in the end. I said, “there’s no point if I really want to be a musician, I don’t think double majoring is going to improve my chances of getting a job in an orchestra. Either I have to give it everything or do something else. And there’s nothing else I really want to do right now. So why don’t I just go for it?”

I did go for it, and went to The Eastman School of Music in Rochester, N.Y.  My teacher there, Pamela Frame, had also been my teacher at Interlochen the previous summer and we had clicked.  She’s a wonderful teacher and recitalist who studied with the great cellist, Mstislav Rostropovich.  I had also been accepted to other schools and conservatories, but I really liked the positive atmosphere at Eastman when I auditioned.  Eastman just felt like a good fit for me.  During my 4 years there I learned so much. The music history and theory academics were rigorous, and in addition to solo and orchestra performances I played tons of chamber music, including many works by incredibly talented composition students, and participated in their Arts Leadership Program, which helped prepare me for the non-playing aspects of a music career.

In the summers I participated in festivals at Aspen, Co and Verbier, Switzerland.  It was during those summers that my real orchestral training began!  I had the opportunity to work with fantastic conductors, and learn a lot of major orchestral works in a short period of time.  The quick rehearsal and performance schedule was a lot closer to the reality of a professional orchestra, and I loved digging into new works every week. Plus the camaraderie I developed with the other musicians there led to life-long friendships, and I have a network of musician friends all over the world as a result.

After Eastman, I went to graduate school at Northwestern and studied with Hans Jorgen Jensen.  I had heard from other cellists about his excellent teaching and strong cello studio, and I learned about a program with the Civic Orchestra of Chicago and Northwestern which could provide a full-tuition fellowship if I got into both programs.  That motivated me. I got the fellowship, went to Northwestern, and never looked back.

During those years in grad school, I was extremely busy with Civic rehearsals and concerts downtown, and Northwestern course load, which included playing in the University’s orchestra, chamber music, orchestral repertoire and pedagogy classes, plus my lessons with my teacher.   In my lessons I focused on my solo playing and preparation for various competitions, which led me to win the school’s concerto competition.  My practice schedule was very intense, since I was also getting ready for orchestra auditions in my 2nd year of grad school.  I would try to get at least 4 hours in every day, but 5-6 on days when my rehearsal and class schedule was lighter.  Hans was great at motivating his students to practice, and was often seen by the practice rooms at 11pm checking up on us and giving us a kick in the pants if we needed it.  There were nights I left the practice hall after midnight!

Interview edited for length and clarity by Claire Thompson. 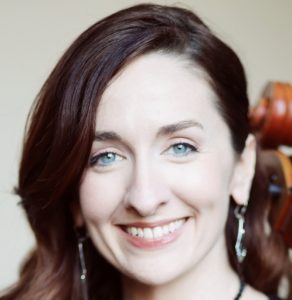 Praised for her exquisite tone and musical phrasing, cellist Úna O’Riordan enjoys a versatile career as an orchestral and chamber musician, new music advocate, teacher and clinician. She has performed as soloist and chamber musician in the United States, Canada, and Europe. She was appointed to the Detroit Symphony Orchestra in 2007, and her previous posts include the Oregon Symphony, Principal Cellist of the Sarasota Opera Orchestra, and Assistant Principal Cellist of the Sarasota Orchestra. An advocate for contemporary classical music, Úna is a member of the New Music Detroit (NMD) ensemble, with whom she released their 2018 debut recording “Smoke: The Music of Marc Mellits” on the Innova label. In recent years, she has performed in recital with such diverse artists as legendary pianist Menahem Pressler, violinist Cho-Liang Lin, singer-songwriter Shara Nova, composer/percussionist Andy Akiho, Fifth House Ensemble and the Zodiac Trio.

In 2019, Úna joined the faculties of Oakland University School of Music Theatre and Dance and Wayne State University. She has taught and performed at the Zodiac Festival & Academy in Valdeblore, France, and the Fresh Inc Festival for contemporary music performance and composition in Racine, Wisconsin. From 2013-2017 she taught and performed at the American Institute for Musical Studies (AIMS) in Graz, Austria, where she has led audition-training workshops and served as principal cellist of the festival orchestra.

Úna is a graduate of the Eastman School of Music, where she received a Bachelor of Music with Distinction and was named an Arts Leadership Scholar. She received her Master of Music degree from Northwestern University’s Bienen School of Music. Her principal teachers include Hans Jorgen Jensen, Alan Harris, and Pamela Frame. During her training she participated in masterclasses with Yo-Yo Ma, Janos Starker and Paul Katz. She was a fellowship recipient at the Aspen and Meadowmount Schools of Music, and participated in the Verbier Festival and New York String Seminar at Carnegie Hall.