What do you find significant in Symphonic Etudes and why? Where would you place them in Romantic repertoire’s hierarchy?

I find the combination of virtuoso writing and deep expression very compelling as a performer. Sometimes when I turn the page I gasp a bit at the technical challenge, but there is always a deeply musical basis for each Variation and Etude. I enjoy how Schumann can be writing most powerfully one moment and the next presenting you with a tender song- orchestrally and then suddenly most intimately.  I would place the Symphonic Etudes at the pinnacle of the Romantic repertoire even though they were virtually ignored in Schumann’s lifetime.

Are there other Schumann pieces that would help the performer prepare for his Etudes?

Before I approached Op. 13 I had studied Papillons, Carnival, Fantasiestücke, Faschingsschwank aus Wien and played much of his chamber music. Chopin influenced Schumann quite a bit and I think studying Chopin’s works as well as Bach can play into how you perceive Schumann. The voices in Bach strongly affect how you look at the voices in other composers.

How would you treat additional variations? Play them all (Richter), not play them at all (Gilels), or play some of them (Pletnev)? Is their order important? And where would you place them? What should the performer do here?

I don’t play them partly because I’m never satisfied with where to place them. I learned the 1852 version and I love the symmetry of it as is.
I found this interesting in case it resounds with other pianists:
“For the performer who wishes to include the posthumous variations within the Symphonic Etudes, where to play them is a question without a definitive answer. Rather, the solution requires imagination, creativity, and experimentation. This exploration contributes to the continuing evolution and ongoing life of the Symphonic Etudes as no two performers need play the piece in exactly the same arrangement. From this standpoint, the Symphonic Etudes is quite unique, and I believe this continued exploration creates renewed interest in the work, both for the performer and listener”
-Michael Seregow

How to choose the tempo in the Theme? What the performer should consider when choosing the tempo?

I think of the opening Thema expansively- as a statement, a welcoming. You wouldn’t open the door and rush your guests in- do think graciously and broadly. The first Variation takes off a bit in speed and I think considering the flow of Variations after the Thema helps you find the tempo.

How would you practice Etude III’s staccati?

I would perhaps take the hands separately at first and play down into the key in the right hand for every staccato note – in other words don’t phrase just yet. Treat the right hand like an etude and perhaps under tempo for a while. Let the speed come by itself- never force speed. When the speed is natural then phrase the notes in staccato. Achieve the sweep and long line of the left hand and gradually put it back together.
I think it’s helpful to look at the voices separately sometimes as you would in Bach but not for too long. You need to have it work as a whole.

How to achieve lightness in staccato while retaining precise rhythm in Variation IV? Should we use the pedal after all?

The pedal is the soul of the piano. I wouldn’t be afraid to use it but sparingly in this Variation. Again I practice staccato with a downward motion letting the hand rebound naturally creating staccato. Don’t think “up”….let it happen. To achieve lightness in general play a bit slower into the key and you will get a softer and softer sound. Save a great deal of speed into the key for ff and when you need power.

Etude IX is the most difficult. How do you address these difficulties – chord and octave staccatos played in different dynamics? Any suggestions how to practice them?

I think you have to do several things at once and that may be at first a difficulty. Playing the chords so that your hand is in the optimal place on the key is one aspect- you find yourself moving in and out a bit. Don’t feel that you have to stay in one position and do make allowances for sharps and having to move inside the key to accommodate them. The staccato again should be practiced downward with a natural rebound- you want to get control of every chord and octave just as if they were single notes. Think “hand” and not fingers. When he asks for “piano” you can play a bit slower into the key and when he asks for ff go into the piano with more speed. You can achieve a great expanse of dynamics simply by the speed in which you approach the note. Don’t look at ff and start to press- freedom of movement is more of what you need. This Etude is quite rhythmic and feeling the downbeat strongly can’t hurt. Let speed happen by itself after practicing the Etude under tempo for a while.

Why, do you think,  Variation IX is in G# Minor, not in the main key of C# Minor? The Left Hand should remain very soft, light, and clear. How do we use the pedal?

V of I isn’t such a stretch and it’s a stroke of genius that he leaves C sharp minor. I think the great composers could make sudden changes like that work. Do read John Daverio’s book, “Schumann, Herald of a Poetic Age” for great insight into Schumann’s musical mind and soul.
I think you can achieve the softness, clarity and lightness despite the pedal- I would use it! And I would work for a great deal of evenness in the left hand and clarity of the changing notes- those are the key to the harmony. Don’t drown the left hand in pedal, but do go for color and movement. That with the exquisite right hand melody will be sublime in the end.

What other things the performer must consider when practicing Op. 13?

Have courage! It helps to have played much of Schumann and gotten into his world.  Schumann’s entire being was music, informed by dream and fantasy. He was music’s quintessential Romantic, always ardent, always striving… 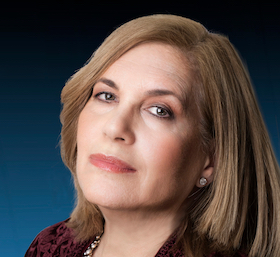 Beth Levin debuted as a child prodigy with the Philadelphia Orchestra at age twelve. She was subsequently taught and guided by legendary pianists such as Rudolf Serkin, Leonard Shure and Dorothy Taubman. Another of her teachers, Paul Badura-Skoda, praised Levin as “a pianist of rare qualities and the highest professional caliber.” Her deep well of experience allows an intuitive connection to the great pianistic traditions, to Bach, to Mozart, to Beethoven.
Levin has appeared as a concerto soloist with numerous symphony orchestras, including the Philadelphia Orchestra, the Boston Pops Orchestra, the Boston Civic Symphony and the Seattle Symphony Orchestra. She has also worked with noted conductors such as Arthur Fiedler, Tonu Kalam, Milton Katims, Joseph Silverstein and Benjamin Zander.
Chamber music festival collaborations have brought Levin to the Marlboro Festival, Casals Festival, Harvard, the Edinburgh Fringe Festival, the Ankara Music Festival and the Blue Hill Festival, collaborating with such groups such as the Gramercy Trio (founding member), the Audubon Quartet, the Vermeer Quartet and the Trio Borealis, with which she has toured extensively. Her solo performances have been broadcast on National Public Radio, WGBH (Boston), WFMT (Chicago) and WNYC, WNYE, and WQXR (New York).
The New York Times praised her “fire and originality,” while The New Yorker called her playing “revelatory.” Fanfare described Levin’s artistry as “fierce in its power,” with “a huge range of colors.”